In the years following the Civil War, railroad men, land developers and speculators moved into Jones Valley to take advantage of the area’s rich mineral resources. All the ingredients needed to make iron lay within a thirty-mile radius. Seams of iron ore stretched for 25 miles through Red Mountain, the southeastern boundary of Jones Valley. To the north and west were abundant deposits of coal, while limestone, dolomite, and clay underlay the valley itself. In 1871 southern entrepreneurs founded a new city called Birmingham and began the systematic exploitation of its minerals. 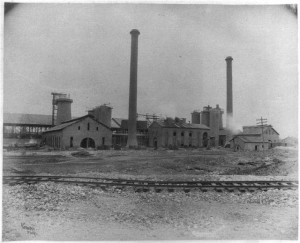 One of these men was Colonel James Withers Sloss, a north Alabama merchant and railroad man. Colonel Sloss played an important role in the founding of the city by convincing the L&N Railroad to capitalize completion of the South and North rail line through Jones Valley, the site of the new town. In 1880, having helped form the Pratt Coke and Coal Company, which mined and sold Birmingham’s first high-grade coking coal, he founded the Sloss Furnace Company, and two years later “blew-in” the second blast furnace in Birmingham.

Construction of Sloss’s new furnace (City Furnaces) began in June 1881, when ground was broken on a fifty-acre site that had been donated by the Elyton Land Company. Harry Hargreaves, a European-born engineer, was in charge of construction. Hargreaves had been a pupil of Thomas Whitwell, a British inventor who designed the stoves that would supply the hot-air blast for the new furnaces. Sixty feet high and eighteen feet in diameter, Sloss’s new Whitwell stoves were the first of their type ever built in Birmingham and were comparable to similar equipment used in the North. Local observers were proud that much of the machinery used by Sloss’s new furnaces would be of Southern manufacture. It included two blowing engines and ten boilers, thirty feet long and forty-six inches in diameter. In April 1882, the furnaces went into blast. After its first year of operations, the furnace had sold 24,000 tons of iron. At the 1883 Louisville Exposition, the company won a bronze medal for ‘best pig iron.’

During the 1880s, as pig iron production in Alabama grew from 68,995 to 706,629 gross tons, no fewer than nineteen blast furnaces would be built in Jefferson County alone. Per Dr. W. David Lewis, author of Sloss Furnaces and the Rise of the Birmingham District, Sloss Furnaces was born at a time when the “doldrums of the postwar era had ended and the South was feeling a measure of confidence for the first time since the opening years of the Civil War.” 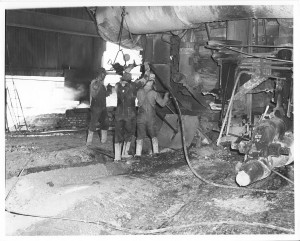 Town planners, railroad magnates, and industrialists such as, Sloss received, as one Alabama newspaper stated, “a degree of adulation previously reserved for military heroes.” In November 1881, the Birmingham press promoted Sloss as a candidate for governor. “His excellent business qualifications, brilliant intellect, splendid character, and fine executive ability, all combined, make him the grandest man in Alabama today for our chief executive. He is the very personification of Christian manhood and integrity, possessing the qualifications of head and heart which we should emulate.” Inspired by such rhetoric, Alabama, not surprisingly, eagerly embraced what was being called the “gospel of industrialism.”

James W. Sloss retired in 1886 and sold the company to a group of financiers who guided it through a period of rapid expansion. The company reorganized in 1899 as Sloss-Sheffield Steel and Iron, although it was never to make steel. With the acquisition of additional furnaces and extensive mineral lands in northern Alabama, Sloss-Sheffield became the second largest merchant pig-iron company in the Birmingham district. Company assets included seven blast furnaces, 1500 beehive coke ovens, 120,000 acres of coal and ore land, five Jefferson County coal mines and two red ore mines, brown ore mines, and quarries in North Birmingham. By World War I, Sloss-Sheffield was among the largest producers of pig iron in the world. 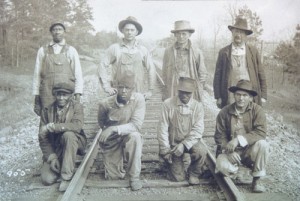 In the late 1930s World War II expanded the market for iron and steel and created jobs for Birmingham workers. By 1941 when America entered the war, nearly half the labor force was employed by the iron and steel and mining industries; more than two-thirds of the industries’ workers were African-American.

Despite being dominated by black labor, the industrial workplace was rigidly segregated until the 1960s. Workers at Sloss bathed in separate bath houses, punched separate time clocks, attended separate company picnics. More important was the segregation of jobs.

The company operated as a hierarchy. At the top there was an all white group of managers, chemists, accountants, and engineers; at the bottom an all black “labor gang” assisted, (until its demise in 1928, by the use of convict labor). Sloss utilized the convict leasing system only in its coal mines. As Lewis noted in Sloss Furnaces, “….convict labor, mostly black, was an important weapon in the district’s economic warfare with northern manufacturing.” Slavery had not died but merely been transformed.

In the middle a racially mixed group performed a variety of skilled and semi-skilled jobs. Even in the middle-group, however, white workers held the higher paying, higher status “title” positions–stove tenders, boiler-makers, carpenters, and machinists. Black workers were restricted to such “helper” roles as carpenter helper, machinist helper, and stove tender helper. 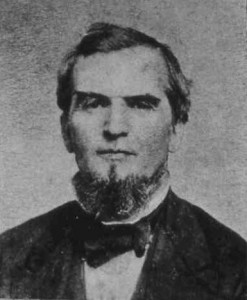 Sloss became involved in railroads in the 1850s and fifteen years later ended up as president of the Nashville and Decatur line. During this postwar period, Sloss not only promoted the development of Southern rail, but became one of the chief proponents of Alabama’s postwar industrial development. In 1871 he struck a deal with the L&N Railroad to complete a 67-mile gap of the South and North Railroad between Birmingham and Decatur. Ultimately reaching the Gulf of Mexico, the L&N invested more than $30 million in furnaces, mines, wharves, steamship lines and other Alabama operations. By 1888 it was hauling annual tonnage of iron, coal, and other mineral products outweighing the nation’s entire cotton crop.

Sloss’s decision to bring in the L&N transformed Birmingham from a squalid jumble of tents, shanties, and boxcars into a thriving community. Anxious to tap the rich mineral resources surrounding Birmingham, Sloss, along with fellow Birmingham promoters Henry DeBardeleben and James Aldrich, acquired 30,000 acres and formed the Pratt Coal and Coke Company. Pratt soon became the largest mining enterprise in the district. In the early 1880s, with the backing of Henry DeBardeleben, Sloss founded the Sloss Furnace Company, and two years later ‘blew-in’ the second blast furnace in Birmingham. Called City Furnaces, the plant was located at the eastern edge of downtown, at the intersection of two major railroads. The majority of Sloss pig iron ended up in Cincinnati, Louisville, Chicago, and Cleveland. Pig iron costs in Northern plants averaged $18.30 per ton in 1884 while pig iron in the South could be produced for $10-$11 a ton. By the 1880s Birmingham was booming and had earned the nickname The Magic City.

Sloss retired in 1886 and sold the company to a group of financiers who guided it through a period of rapid expansion. The company reorganized in 1899 as Sloss-Sheffield Steel and Iron, although it was never to make steel. With the acquisition of furnaces and extensive mineral lands in northern Alabama, Sloss-Sheffield became the second largest merchant pig iron company in the Birmingham District.

James Withers Sloss continued to be interested in iron and steel-making until his death in May of 1890. Praising Sloss, an obituary in the national trade journal, “Iron Age”, stressed “his farseeing discernment, indomitable energy and modern ideas. 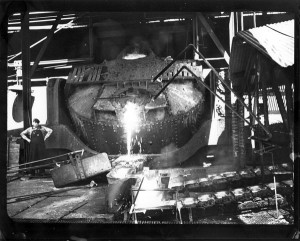 Sloss received National Historic Landmark designation in 1981 and opened its gates in September 1983, as a museum of the City of Birmingham. Its collection consists of two 400-ton blast furnaces and some forty other buildings.

Nothing remains of the original furnace complex. The oldest building on the site dates from 1902 and houses the eight steam-driven “blowing-engines” used to provide air for combustion in the furnaces. The engines themselves date from the period 1900-1902 and are a unique and important collection—engines such as these powered America’s Industrial Revolution. The boilers, installed in 1906 and 1914, produced steam for the site until it closed in 1970.

Between 1927 and 1931 the plant underwent a concentrated program of mechanization. Most of its major operation equipment—the blast furnaces and the charging and casting machinery–was replaced at this time. In 1927-28, the two furnaces were rebuilt, enlarged, and refitted with mechanical charging equipment, doubling the plant’s production capacity.

While the site strongly reflects the changes made from 1927-1931, some of the technology is more current. The company built a dehumidification plant during World War II to reduce consumption of coke. Use of the system was discontinued when the war ended, but the building and equipment remain. In the late 1940s the company two slag granulators to produce the “expanded slag” needed to make structural concrete, mineral wool and other products. Finally, in 1949 and 1951 the company replaced the old blowing engines with two-turbo blowers. About two-thirds of the historic structures on the site were stabilized using the bond funds approved by Birmingham voters in 1977. Parts of the site were also adapted for use as a center for community and civic events and for an innovative program in metal arts. Sloss now hosts concerts, festivals, and conferences, as well as workshops and exhibitions of metal art. By helping people form new attachments to the old furnaces, these programs keep Sloss an active and important part of the community, as it was for almost a hundred years.

Sloss is currently the only twentieth-century blast furnace in the U.S. being preserved and interpreted as an historic industrial site. The dramatic scale and complexity of the plant’s industrial structure, machines and tools make the Sloss collection a unique contribution to the interpretation of twentieth-century ironmaking technology and presents a remarkable perspective on the era when America grew to world industrial dominance. At the same time, Sloss is an important reminder of the hopes and struggles of the people who worked in the industries that made some men wealthy, and Birmingham the “Magic City.

The City of Birmingham, Alabama with assistance from the Alabama Department of Transportation (ALDOT) and the Federal Highway Administration (FHWA), are advancing a project to improve roadway access and system connectivity to residences and businesses in north Birmingham including the Collegeville Community.  Specifically, the proposed project would extend Finley Boulevard from the intersection of 26th Street North (US-31)/Carraway Boulevard east to a point along 27th Avenue North near the intersection of 32nd Street North for a distance of approximately 0.75-mile.

Remnants of the North Birmingham Sloss Furnace were discovered within the project study area and identified as being of “historical importance” to understanding the developmental history of the City of Birmingham.

A Cultural Resources study was conducted, identifying and documenting the history of what is known as the Sloss North Furnace Complex (Site 1Je808).  The study can be accessed via the following links: